Review of SharkEye Case for iPhone 4

I got a brand new case for my iPhone 4 from the very personable, customer-service oriented folks at SharkEye. So far, so good. Being my clumsy self, I've dropped my phone from standing a few times already (in the day and a half I've had it) and it has held up beautifully. The trickiest bits so far have been learning how to get the case on and off and remembering to slide the SharkEye screen protector back across when I'm done looking at my phone. That's the main difference between the OtterBox Defender I had before and the SharkEye. While the OtterBox had a built-in screen guard, the SharkEye's protector retracts. Both cases include a hard shell and a soft silicone. On the SharkEye, the silicone layer is beneath the hard layer, preventing the gapping and ripping that I experienced with the OtterBox.

Here are my thoughts on the Pros and Cons of the SharkEye:


Here are some photos of the two cases side by side, for comparison's sake.
For more information, visit the SharkEye website: http://www.sharkeye.com/iphone-4-rugged-cases.php 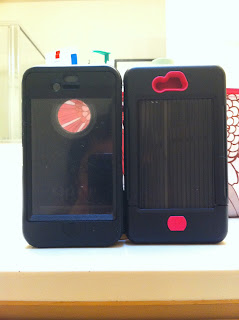 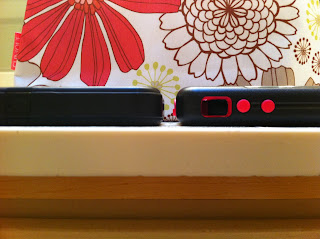 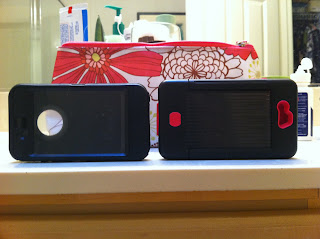